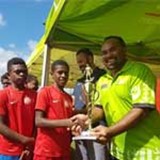 Over 300 registered participants aged 5-17years were in competition.

In the 8-10 years age group category, the Amicale Warriors proved too good this season, taking out the top spot followed by Mele 1 in 2nd, while Mele 2 placed 3rd in the competition. In Category of 11-13 years age group. Ocean Blue finished in 1st place, while the 2nd place was claimed by  Eratap 1 followed by  Eratap 2 on 3rd place. Bellevue claim the limelight for the first place, in Categories 14-17 year age group. The 2nd place went to Amicale Stars and 3rd place went to Mele 1.

BSP Amicale Soccer Sevens also recognised players for their skills and sportsmanship during the competition the program; encouraging gender equality and Fair Play. This season, the Player of the Match Award was given to Nena Mansale, Melito Mansale and Paul Tapao in each of their categories.

During the course of the competition the players had displayed the theme of RESPECT, they had built up their self-esteem and self-worth, they displayed teamwork and quality play these are the BSP principle values of which the program is established on.

BSP's Head of Retail and Marketing, Moana Korikalo said, "BSP continues to support events such as this because it encourages community participation and respect for each other in the community. BSP is a bank that believes in its people and the communities in which we operate in."

The BSP Amicale Soccer Sevens season is in its 3rd year of its sponsorship, and is proudly supported by Bank South Pacific (BSP) and Asco Motors Vanuatu.

Ms Korikalo also thanked the organisers and players and teams for a successful competition and looks forward to more teams and player's registration for Season Two. Registrations start Saturday 13th